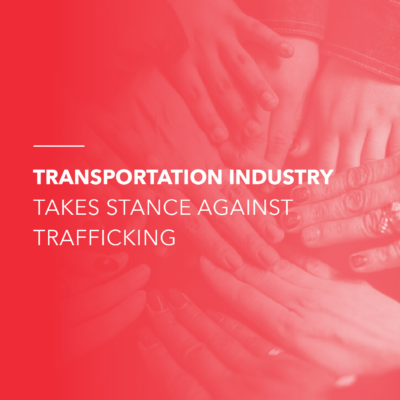 Human Trafficking continues to have a large impact on today’s society, especially with the numerous forms of transportation. Traffickers are always on the move, meaning they need a reliable form of transportation. According NBC News “because traffickers often exploit the transportation system to move their victims across the country, truckers are at an advantage in spotting signs and making reports”. Since truckers are making similar stops at fast food restaurants, hotels, and rest areas, drivers are able to spot signs of trafficking much sooner than others. The nonprofit organization Truckers Against Trafficking is helping drivers spot the signs in hopes of preventing human trafficking.

Truckers Against Trafficking (TAT) is a nonprofit organization that prepares and trains truck drivers to identify and report occurrences of human trafficking. Since 2009, TAT has trained a total of 845,115 individuals, while receiving 2,496 calls about possible incidents involving human trafficking according to their website. Part of the training helps drivers recognize knocks on their door late at night and the correct action to take if they suspect the person is a victim of human trafficking. Although many truck drivers are technically “off the clock”, most understand that reporting these incidents is part of their responsibility. NBC states that “since the organization was created, 12 states have either changed rules or passed legislation to include anti-trafficking training in commercial driver’s license school curricula”. Truckers Against Trafficking continues to spread awareness to individuals, specifically people within the transportation industry, and has recently partnered with DOT to help further combat human trafficking.

Transportation Secretary Elaine Chao recently took an initiative in the fight. According to Transport Topics, Chao challenged industry leaders to commit to combating human trafficking through workforce training and by raising awareness of the issue. Chao specifically drew her attention to the Transportation Leaders Against Human Trafficking pledge, which focuses on educating employees, raising awareness among travelers, and measures our collective impact. Chao has asked the transportation industry to commit to 100 pledges in 100 days. Several days after speaking out about this issue, President Trump signed an executive order that helps fight human trafficking and sexual exploitation. The Department of Transportation Advisory Committee on Human Trafficking states that approximately 25 million people globally are exploited. With the implementation of this executive order, there are hopes of lowering the number of individuals who fall victim.

Many people do not realize that most trafficked persons are in front of the public eye. Compared to present day, identifying human trafficking 25 years ago was extremely difficult due to scarce resources and tips to recognize red flags. However, resources such as courses, videos, and reading material focused on identifying signs of human trafficking are available today to further educate the public. Everyone has the ability to look for signs and report incidents to the National Human Trafficking Hotline. According to the National Human Trafficking Hotline, several signs of trafficking include inadequate work and living conditions, poor mental health or abnormal behavior, poor physical health, and lack of control. Some of these red flags will not be present in all cases, but by looking for these specific examples, a life could be saved. Additional physical signs to look for include people who have few personal items and wear the same clothes every day, are accompanied by someone who seems to control them, and appear malnourished or have injuries and signs of physical abuse. Many individuals that fall victim to trafficking may shy away or avoid eye contact with strangers who may want to help. Gaining as much information as possible from these interactions is extremely important to help assist law enforcement and the Human Trafficking Hotline with a possible case. Simply giving a description of the car and license plate number could lead to victim identification and case generation.

Human trafficking continues to be a pressing issue globally. Although many people are aware of this problem, not everyone is familiar with the resources available and signs of suspicious activity. Several nonprofits, including the Polaris Project and Truckers Against Trafficking, are great resources for individuals who may not be extremely familiar with this issue. Spreading awareness and conducting research are two simple ways people can help combat human trafficking. If a person sees wary activity, report the incident via text message, phone call, online chat, email, or by submitting an online tip report. According to the National Human Trafficking Hotline, since December 2007 a total of 246,267 contacts have been received, an average of 23,784 contacts per year. Whether working within the transportation industry or through every day travel, everyone can make a difference in the global fight against human trafficking.